The formation of the state began with the city, which was founded in 1540 as the Spanish began the conquest of the Yucatán Peninsula. During the colonial period, the city was a rich and important port, but declined after Mexico’s independence. Campeche was part of the province of Yucatán but split off in the mid-19th century, mostly due to political friction with the city of Mérida. Much of the state’s recent economic revival is due to the finding of petroleum offshore in the 1970s, which has made the coastal cities of Campeche and Ciudad del Carmen important economic centers. The state has important Mayan and colonial sites; however, these are not as well-known or visited as others in the Yucatán.

Much of Campeche’s territory is filled with various archeological sites, almost all of which are Mayan. These sites are far less known and visited than sites to the east such as Chichen Itza, Uxmal and Tulum . An early important site is Edzna, located near the city of Campeche in a region known as los Chenes. It was one of the most important ceremonial centers in the pre Classic Maya period (300-900CE). Its building show Petén, Chenes and Puuc influence, with a large acropolis surrounded by various temples, the most important of which is the Pyramid of the Five Floors. It was discovered in the 1920s and excavated in the 1940s. It is located away from other Mayan settlements on the peninsula and was probably a collection center for the agriculture products grown in the area, reaching its height between 600 and 900. These were sent to the city of Tikal in exchange for ritualistic adornment for the site. Its most important building is the Pyramid of the Five Stories, built as its name implies. Another important find came in the 1990s. During the planting season in early May, archeologist Antonio Benavides noticed that the setting sun illuminates a stucco mask hanging one of the pyramid’s rooms. The effect also happens in August, during harvest and it is believed to be related to the asking and receiving of abundant crops.

The largest archeological site in the state is Calakmul, which means “twin heaps” in Maya. It is located in the Petén region built in the late Classic period (500-900 CE). Calakmal is estimated to have been populated around 1000 BCE with its height at around 600 In 695 CE, Calakmul was conquered by Tikal and the city fell into decline. Calakmul is located in the interior rainforest of the state in a biosphere named after it near the Guatemala border. The site extends over 70 km² and was one of the largest cities of Mesoamerica. Its temples were mostly dedicated to ancestor worship encircling the palaces of the elite in the center. There are an estimated 6,000 structures at the site with only half a dozen restored. The two most important structures are the twin pyramids of Temple II and Temple VII, similar to structures found at Tikal. Temple II is tallest at 50 m high. The site has been heavily looted by grave robbers. 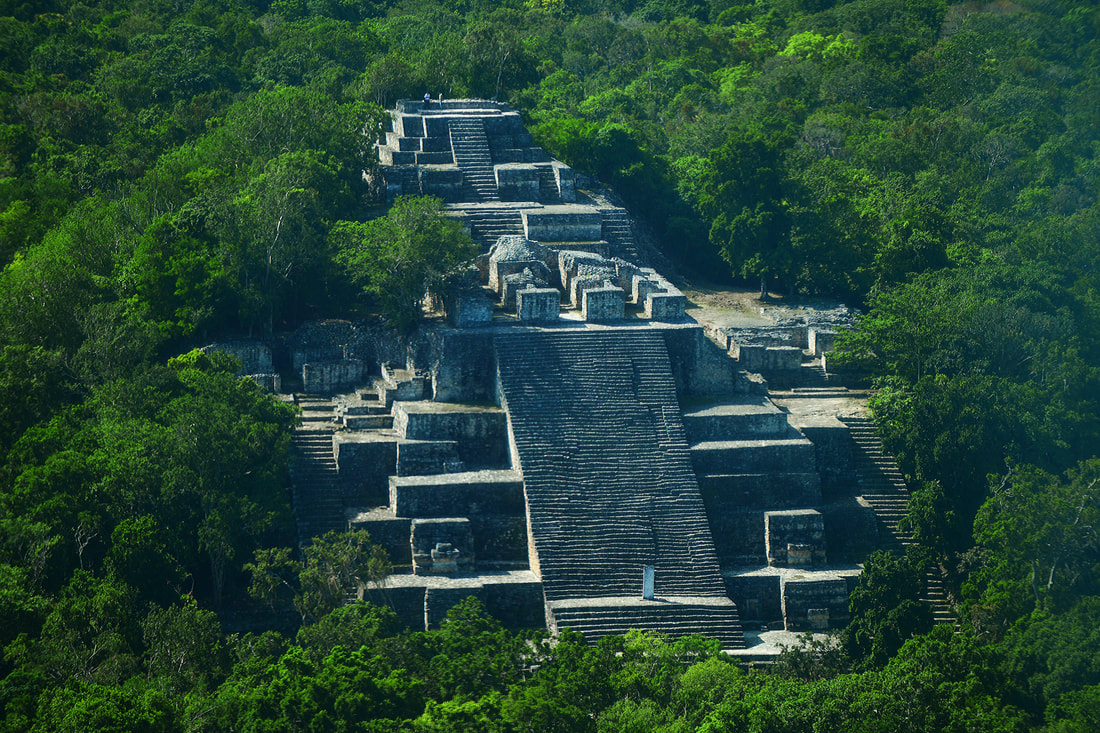