Cozumel, Quintana Roo is one of the most popular destinations cruising the Yucatan Peninsula of Mexico.  Get to know this destination inside out; learn about its origin, and all the activities to cover during your stay. Discover all the magic this small island has to show.

Things to do in Cozumel

Snorkeling in Cozumel
Water Activities
Cozumel is world-known for being home to more than 40 scuba diving areas. Water temperature is ideal for divers and the crystal-clear water makes it easier for them to witness the beauty that lives under the ocean. Scuba diving options range between 3 to 30 meters deep, all year long. Some scuba divers visit Cozumel during March to December for a chance to see the famous Eagle Ray species.

Golf
The Cozumel Country Club is a par-72 golf course designed by Jack Nicklaus. This beautiful course is certified by the Audubon Cooperative Sanctuary, which means it takes care of the environment. This 18-hole golf course welcomes golfers from all levels.

Places You Can’t Miss
While in Cozumel, you can’t miss the “Isla de la Pasión” (Pasion Island). This island is home to some of the most beautiful and tranquil waters, and has multiple activities for all kinds of travelers. Guests enjoy a peaceful walk around the island, or find themselves doing some adventure kayaking and paddle boarding. Another great spot to visit is the “Granja de Perlas” (Pearl Farm), which opened its doors in 2012. The Pearl Farm is world-known due to its production of “Pinctada Radiata,” its size and color make this a very coveted kind of pearl.

Natural Parks and Museums
Discover the Cozumel Island Museum, where you’ll find four exhibitions that feature historical, religious, and cultural objects that will help you understand Cozumel’s foundation. The Navigation Museum is also a local favorite. Guests get to witness the Mayan culture history, and the pirates that navigated the Mexican Caribbean. Immerse yourself in Cozumel’s nature, and visit the Mexico Park Cozumel, the Dolphin Discovery Cozumel, and the Chankanaab Adventure Beach Park. These are all tourist-favorites.

Fishing
Cozumel is home to some of the most popular fishing species in the world. Fishers visit the island in search of Swordfish, Barracuda, and some seasonal species such as Marlin and Sailfish. Guests can choose their fishing modality: fly fishing, sports fishing, and deep-sea fishing.

Beaches
​There are plenty of beaches in Cozumel for guests to pick from! Here’s a list of the most popular ones:
Archaeological Sites
San Gervasio Mayan Archaeological Site was founded around 300 A.C. This historical site takes you on a journey to understanding the Mayan lifestyle. San Gervasio is made up of six architectural elements joined together by white pathways. Another archaeological site in the area is “El Caracol” (The Snail). This site was built around 1200-1500 A.C. and was given this name due to the snail-shaped ornaments in the inside of the temple.

Wellness
Cozumel is perfect for disconnecting from your routine and taking some time for yourself. Find the perfect balance between mind, body, and spirit in one of Cozumel’s beach spas. Guests love experiencing the relaxation of a beachfront spa that allows them to connect with nature. For an alternative experience, enjoy a “temazcal,” which is a prehispanic curative herb-steam bath. Tourists also love relaxing beachfront yoga sessions.

Get to know Cozumel 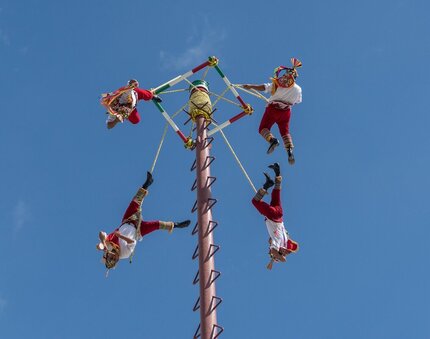 "Voladores de Papantla"
Location and Etymology
Cozumel is an island municipality from the State of Quintana Roo, Mexico. It is located across the Cozumel Channel, on the eastern coast of what’s known as the Yucatan Peninsula - Mexico’s Southern Peninsula that’s made up of 3 popular states: Campeche, Yucatan, and Quintana Roo. The island of Cozumel lies on the Caribbean Sea so it’s well known for its tranquil, turquoise waters and its white sand beaches. The word “Cozumel” stands for “Isla de Golondrinas,” which translates to “Island of Swallows.” Cozumel is a very touristic destination due to its wide variety of activities it has to offer, it’s rich Mexican cultural heritage, and it's amazing gastronomy.

Historical and Cultural References
Prior to the Spaniard’s arrival, Cozumel was inhabited by the Escab province. Cozumel Island was known to be a sanctuary for Ix Chel, goddess of fertility and flooding. The Mayas also worshipped Kukulkán in this area, one of the Mayan’s most worshipped gods. On May 3rd, 1518, the Spanish explorer, Juan de Grijalva, disembarked on this famous island and named it “Santa Cruz.” A year later, Hernan Cortés and Pedro de Alvarado arrived on the island during the course of their expedition. Some very important Mayan icons were destroyed and replaced by Spanish icons upon Cortés and Alvarado’s arrival. Regardless of their invasiveness, the Mayas helped these sailors continue their expedition by restocking their ships with food and water. Two other Spanish explorers, Jerónimo Aguilar and Gonzalo Guerrero, who were left on a previous expedition were rescued during this visit. In 1520, another Spanish explorer, Francisco de Montejo, disembarked on Cozumel Island during the conquest. Cozumel remained inhabited during and after the Spanish conquest until the “Castas” War. The Castas War caused people to search for shelter, resulting in Cozumel’s repopulation. Over the years, Cozumel kept developing, and its economy kept growing due to fishing and tourism. Today, it is one Mexican Caribbean’s top destinations, featuring hundreds of activities, hotels, and restaurants to discover. Some of Cozumel’s most traditional celebrations include the Santa Cruz Festival and El Cedral Fair, and the Cozumel Carnival which fill up the streets with music, food, and a lot of fun.

Iguana by the coast of Cozumel
Flora and Fauna
Cozumel is world-known for its long  stretch of coral reefs, which are home to over a thousand marine species. Scuba divers absolutely love this place. Cozumel is also home to several coastal lagoons and sand banks, which attract thousands of tourists each year. The fauna in cozumel is mostly made up of endemic fish and bird species. Some bird species include the Cozumel Emerald, the Vireo, and the Wren. Another popular endemic species of the area is the Splendid Toadfish, also known as “Coral Toadfish,” which is often found laying under the coral reefs. Other wildlife species include the American Crocodile, and the Black Spiny-tailed Iguana.

​Gastronomy
Cozumel is influenced by the regional Mexican cuisine with a touch of Caribbean seafood. This combination of flavors are a tourist-favorite. Enjoy a “Pez León,” which is a unique species of Cozumel. This fish is grilled or enjoyed in “ceviche.” Cozumel is also home to multiple international fusion cuisines. Some of the island’s most popular restaurants include the Azul Madera, Alfredo Di Roma, and the Le Cap Restaurant. ​