Valladolid, Yucatan is one of the most popular destinations cruising the Yucatan Peninsula of Mexico.

Things to do in Valladolid

Water Activities
It would be easy to assume that Valladolid does not offer much water activities being that this town is located inland within the Yucatan Peninsula. However, this site is packed with magnificent underground water cavities, known as “cenotes,” that are a true nature spectacle for visitors. Some of the top cenotes in the area are the Cenote Zací, Suytun, and Samula/Z’kekén (which are next to each other). These cenotes are all located in the area and are a must when visiting Valladolid. You’re allowed to swim in many of these, and cenote-swimming is one of the best and unique experiences that the Yucatan Peninsula has to offer.

Churches to Visit
Iglesia de San Servacio church is one of the most historic sites in town. This church was demolished and rebuilt in 1705 after the “El Crimen de Los Alcaldes” (the mayor's crime) took place. Osorno, who was Valladolid’s mayor back then, had a love affair with Don Miguel de Ruiz’s wife. Being that Don Miguel de Ruiz was also an influential man in town, this unleashed a sequel of events that ended up in the destitution of Osorno from his city mayor charge. Don Miguel de Ruiz became the new mayor, and proceeded to kill Osorno and one of his best friends inside the chapel. Miguel de Ruiz was prosecuted, incarcerated, and given the death penalty for that crime. Other iconic churches in town include the Iglesia de La Candelaria, Iglesia de Santa Lucía, and Iglesia de Santa Ana. These historic sites portray the colonial architectural influence and amaze visitors from all over the world.

Places You Can’t Miss
Convento Franciscano de San Bernardino de Siena in Valladolid is one of the most iconic sites of the Yucatan Peninsula. This site consists of a church, a chapel, several buildings, and a Guerra de Las Castas museum. Every evening at 9pm, there’s a lights and sound show that features the history of Valladolid projected on the Convento’s wall. It is a true spectacle you can’t miss. Other historic sites include the Palacio Municipal (city hall) and the Mercado Municipal Donato Bates (city market), where you can find fresh fruits, vegetables, and all kinds of crafts. The city hall and mercado are both Valladolid staples. Another key spot to visit is the  Calzada de Los Frailes, a picturesque, colonial street perfect for pictures. This street connected the “Spanish Valladolid” from the “Mayan Valladolid.”

Parks and Museums
The Plaza Central de Valladolid is a must when visiting this magical town. This is the town’s major plaza, so take a stroll around this beautiful park and get some snacks from the street vendors to get that full Valladolid experience. If you want to explore Mexican popular art, visit La Casa de Los Venados, a beautiful house-style museum that exposes pieces from all over the country. The San Roque Museum is another must in town. The building where this museum stands has served for different purposes over the years, so it has a lot of history in it. San Roque was built as a small chapel back in 1575, then got transformed into a hospital, and later on into a convent. Several Mexican Revolutionary heroes were assassinated in this place back in 1910. Also, the bodies of the “Crimen de Los Alcaldes” incident were buried in this place.

Archaeological Sites
Valladolid is surrounded by extraordinary archeological sites such as Ek Balam, Chichen-Itzá, and Cobá. Ek Balam is an old Mayan city, home to the Acrópolis, that was built around 800 AC. It’s name means “black or obscure jaguar,” and it is located North of Valladolid. To the West of Valladolid, you’ll encounter one of the World’s Seven Wonders: Chichen-Itzá. This site used to be one of the Mayan largest cities, and it’s where the famous Temple of Kukulkán resides. East of Valladolid, you’ll find Cobá, another huge Mayan archeological staple located in the State of Quintana Roo. Cobá is home to the Ancient Pyramid, which is still open for tourists to climb (unlike other pyramids in the area). These sites are of huge impact to the Mayan architectural development, and they tell the story about Mayan civilizations.

Get to know Valladolid 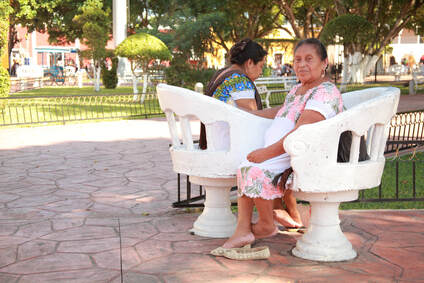 ​Location and Etymology
Valladolid is located right between two major cities of the Yucatan Peninsula, Cancun and Mérida, and was named after the capital of Spain back then. Valladolid, Yucatan is also known as the “Eastern-Mayan pearl;” it’s rich history, amazing cenotes, and delicious food make it a must visit port of call for Yucatan Cruises.

Historical and Cultural References
Valladolid is considered a Mexican “magical town,” a term given to a selected group of towns in Mexico whose past and style reflect the rich history of the area, and their well-preserved colonial style is intact. Tourists and locals love “magical towns” in Mexico because their cobbled streets, colorful buildings, impressive cathedrals, and the life in the streets create a feeling of time-travelling back to Colonial America. Valladolid was established in 1543 by a Spanish conquistador, and by 1545 it was moved further inland by rebuilding it atop Zaci (a Mayan town). Zaci was destroyed in order to use the same material (mostly stone) to rebuild the Spanish town. This created a lot of tension and caused the Mayans to revolt against the Spanish multiple times. Valladolid became the setting for intense battling during the Guerra de Las Castas. The city was sacked by the Mayas, then taken over once again by the Spanish. Today, Valladolid is one of the most important cities of the Yucatan Peninsula.

Gastronomy
There are a lot of traditional dishes, desserts, and snacks you need to try when visiting Valladolid, Yucatan. Valladolid is home to some of the best “marquesitas” and churros from Mexico. Some iconic dishes you must try are Cochinita Pibil, Salbutes, Lomitos, and Papadzules. Don’t forget to get some authentic Mayan chocolate as a souvenir! You’ll find all of the traditional foods in the Mercado de Comida and restaurants in the city center.